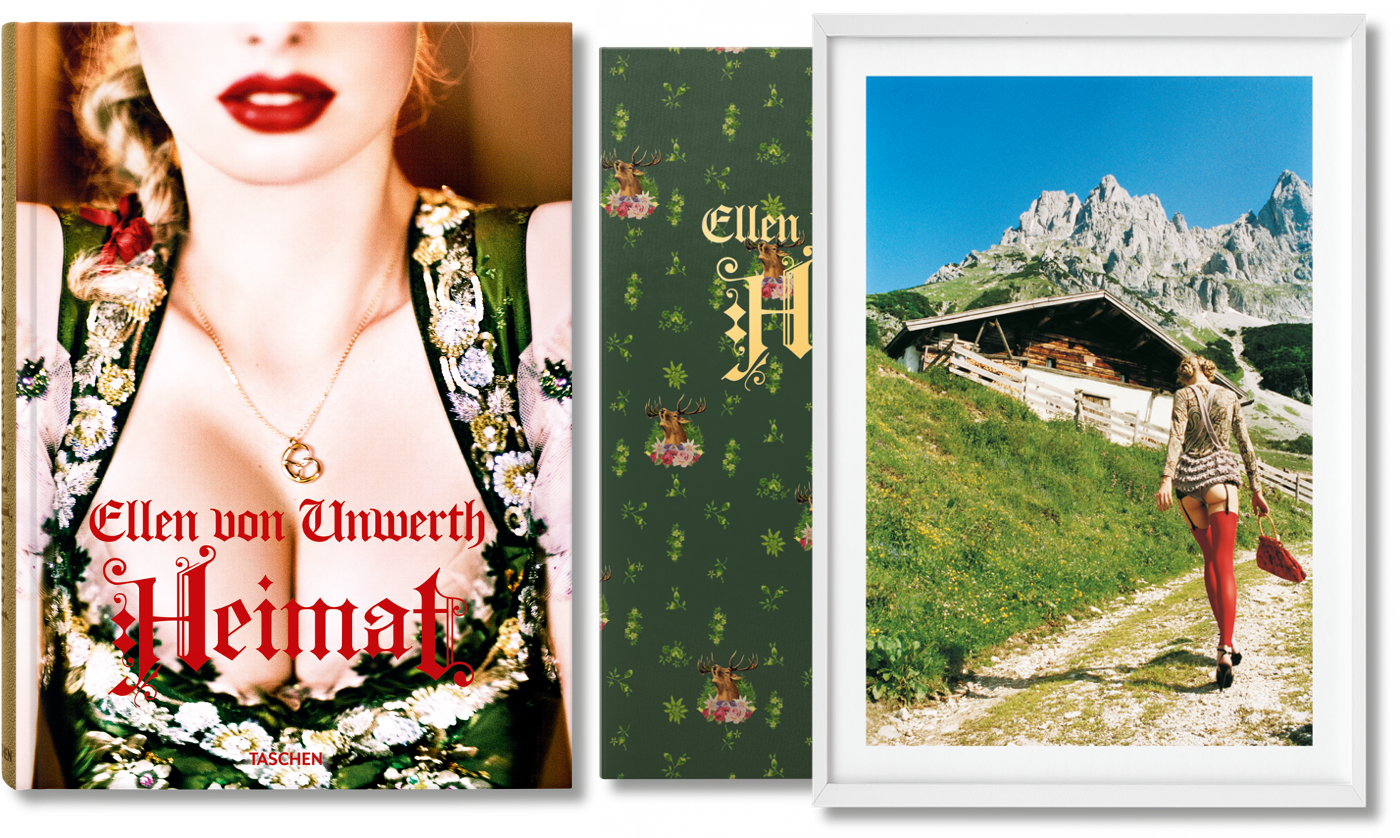 Munich:
not just a place – a way of life.

Cultural appropriation has many culprits. Some are lesser known than others. There are Oktoberfest-s in places you would never have guessed: Hong Kong, Muscat, Johannesburg; there is even one in Sydney. In Munich, on the meadow (in German: Wiesn) where it all began, Oktoberfest is a way of life that can be practiced all year round. You just need to know how to do it right.

First – no, not a Dirndl. Nor a Lederhosen. First, we go and have Brotzeit (breakfast; the second one). The rule is that you need to have it before noon, because Weißwurst, the Bavarian veal sausage, is freshly made every day in the early morning hours – without preservatives. Which is to say, if you eat it after noon and don’t get sick, it was not a proper Weißwurst. (There is no ‘ü’ in that word by the way, the ‘u’ is simply pronounced like, say, U-Turn) Real Bavarians, by the way, are early birds and done with their Weißwurst (or porridge, rather) by 8 am. But you are visiting, so you may sleep in. Just not until midday! 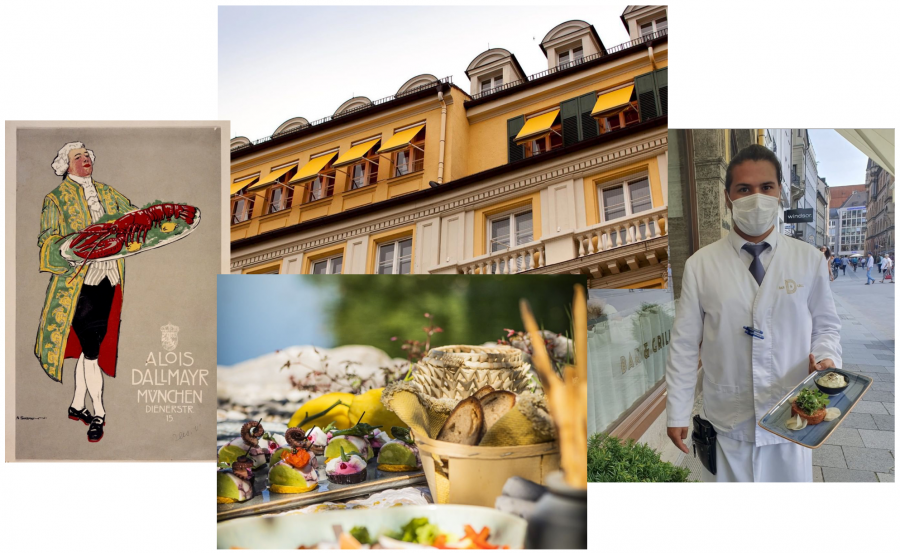 While all the world thinks Munich is about drinking beer, Bavarians will tell you their capital is, in fact, all about good food. (Mind you: Italy is just on the other side of the Alps, raising the standard of fresh vegetables, while the zest of Swiss mountain-cheese culture and the Austrian sophistication in creating deserts make Munich an urban metropolis of Alpine treats at neatly set tables.) Eating well and taking the time to prepare good food from freshly sourced produce is something Bavarian’s justly take pride in.

After you have sampled the various departments of Dallmayr (recuperating from the action over a small dish at their swish Bar&Grill), a stroll over Viktualienmarkt is a must. If you cannot pronounce the name – which comes from the Latin for food, i.e. victuals – simply ask for the big farmer’s market in the city’s historic centre. Its like an institutionalised Saturday morning at Duke of York’s Square but open all day on six days of the week. 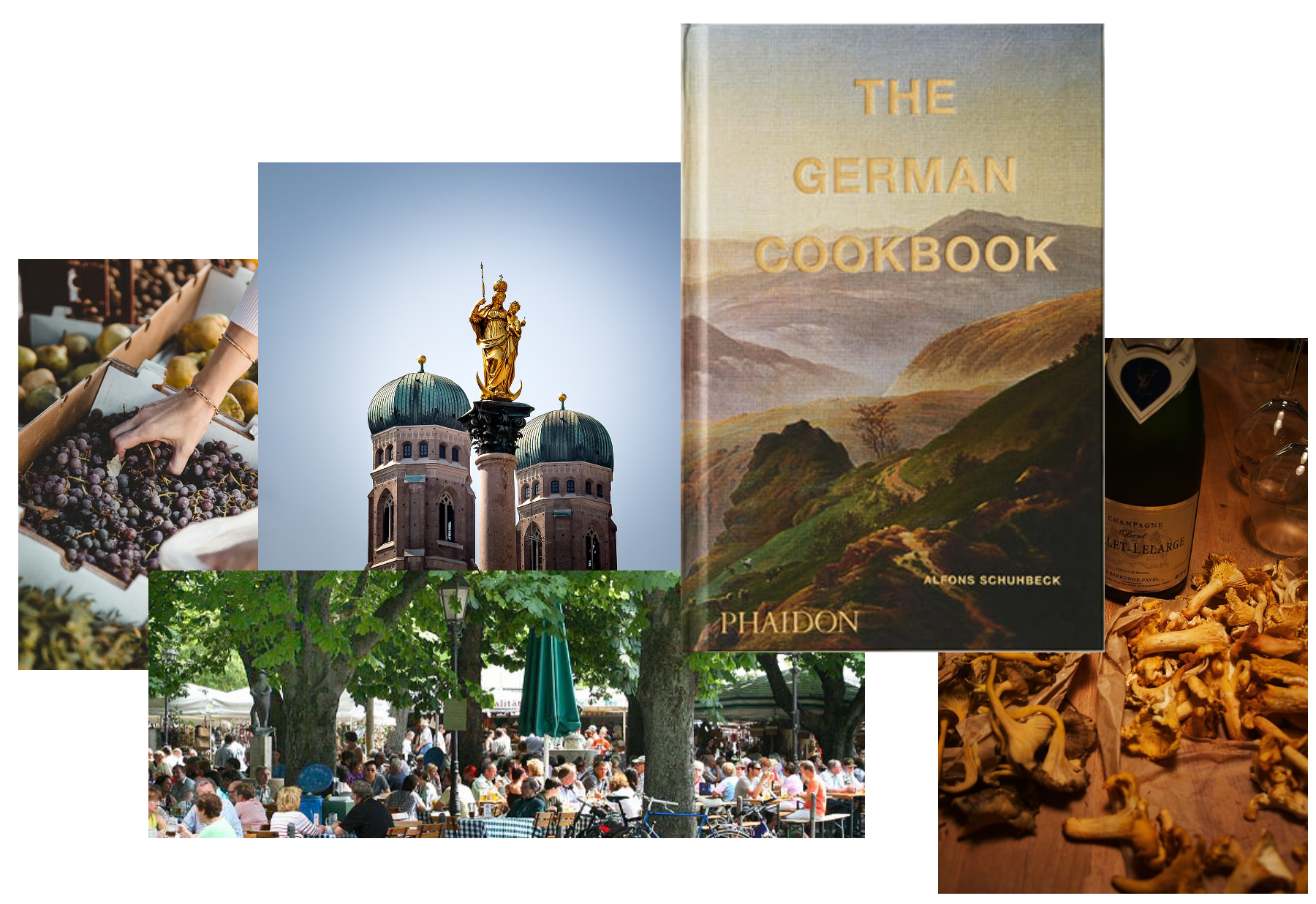 A view of Frauenkirche, Viktualienmarkt and the authoritative  culinary reference work by Munich’s celebrated (and notorious) chef Alfons Schuhbeck

Another misconception is that Bavarians like to take it slow. Nothing could be more wrong. The challenge here is to realize that Bavaria is – this requires close reading – a part of Germany, but at the same time very much not the same as the rest of the country (some would say, the Prussian rest of it). While all the world believes Germans assort themselves either to the East or the West of the country, the people who live in the country’s sixteen federal states are actually more focused on the many small distinctions between North (i.e. Prussia) and South (Bavaria – which secretly wishes it could still be an independent kingdom and tends to put on a little more pomp and circumstance when it comes to having a good time).

Let me give you an easy example: Prussians are known to do everything by the book. Which can take some time. Bavarians, by contrast, like to get things done. Now, the Münchner (German again, this time for ‘people from Munich’), forever torn by the question of being German or rather Bavarian, likes to combine the best of both worlds: They will queue up to go fast. 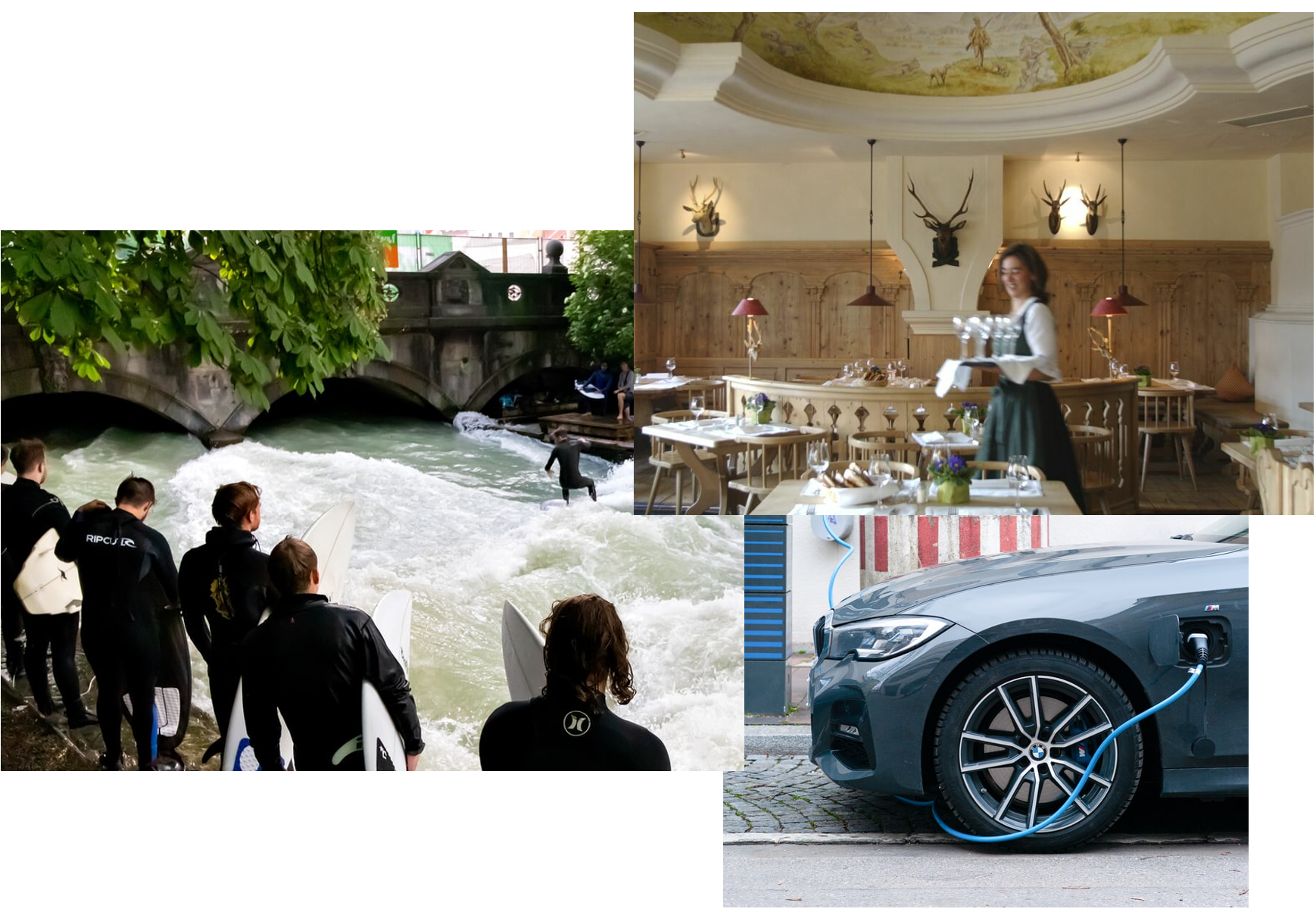 At Munich’s Eisbach, a side-arm of the river Isar that runs through the city, surfers queue up all year round to ride the standing wave; at Wiesn (you know, Oktoberfest) they queue up to go for a ride on the flying swing, and for all other times, they’ve invented BMW.

If you fancy giving it a go yourself, simply sign up for the carsharing service Drive Now before you fly into Munich airport and get one to drive into town, where you can drop it wherever you like.

The best of all ways to move through Munich, however, is by foot. The city’s historic centre is almost completely of limits for cars – which feels a little bit as if Harrods had spread out its departments into an al-fresco ground floor. The Bavarian capital, you will see, loves la dolce vita; and the dolce vita – together with everyone who’s anyone – loves the way the city has turned Bavaria’s taste for rural idyll into a metropolitan lifestyle.

For the most picturesque shopping stroll, walk from Viktualienmarket past Marienplatz towards Dallmayr, and from there across the green into Maffeistraße to make sure you do not miss out on the six floors of sartorial sumptuousness at Lodenfrey. The store is one of those rare sites out of the Arcadia of high-quality fashion that have become increasingly hard to find throughout the world. 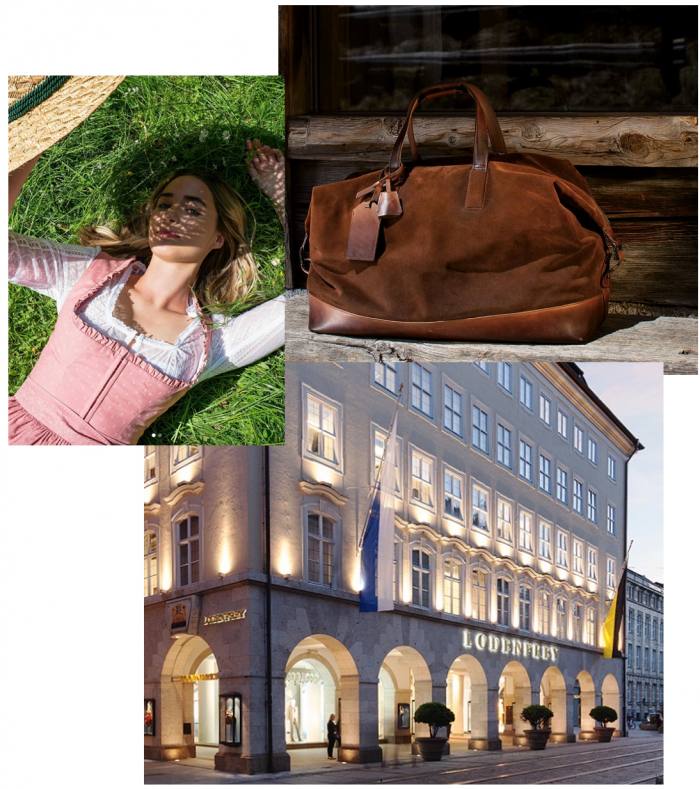 The company started as a weaving mill in 1842, invented the water repellent Loden-cloth (hence the name), and is today in the sixth generation of family ownership, but has never grown old. While the store on the back side of Munich’s famous cathedral carries a large selection of designer labels, its true jewels are the unassuming, but ultra-swish seasonal in-house collections for both men and women that are tailored from the most luxurious fabrics and softest leathers. And yes, there is Baby Gucci, too – but that’s not what you fly to Munich for.

Passing the famous Bayerischer Hof, continue north toward Brienner Strasse. On the way, a window with lovely leather pouches, fancy paper cards and colourful stationary will catch your eye. Make sure to go inside – Prantl has been producing fine stationary for 222 years; traditionally finding the perfect measure in pairing vibrant colour with minimalist lettering. One of our favourite little take-aways from the store is their BUSSI BUSSI (Bavarian for KISS KISS) fold-card. It comes in girly-pink or baby-blue and fits every occasion, so you better stock up! 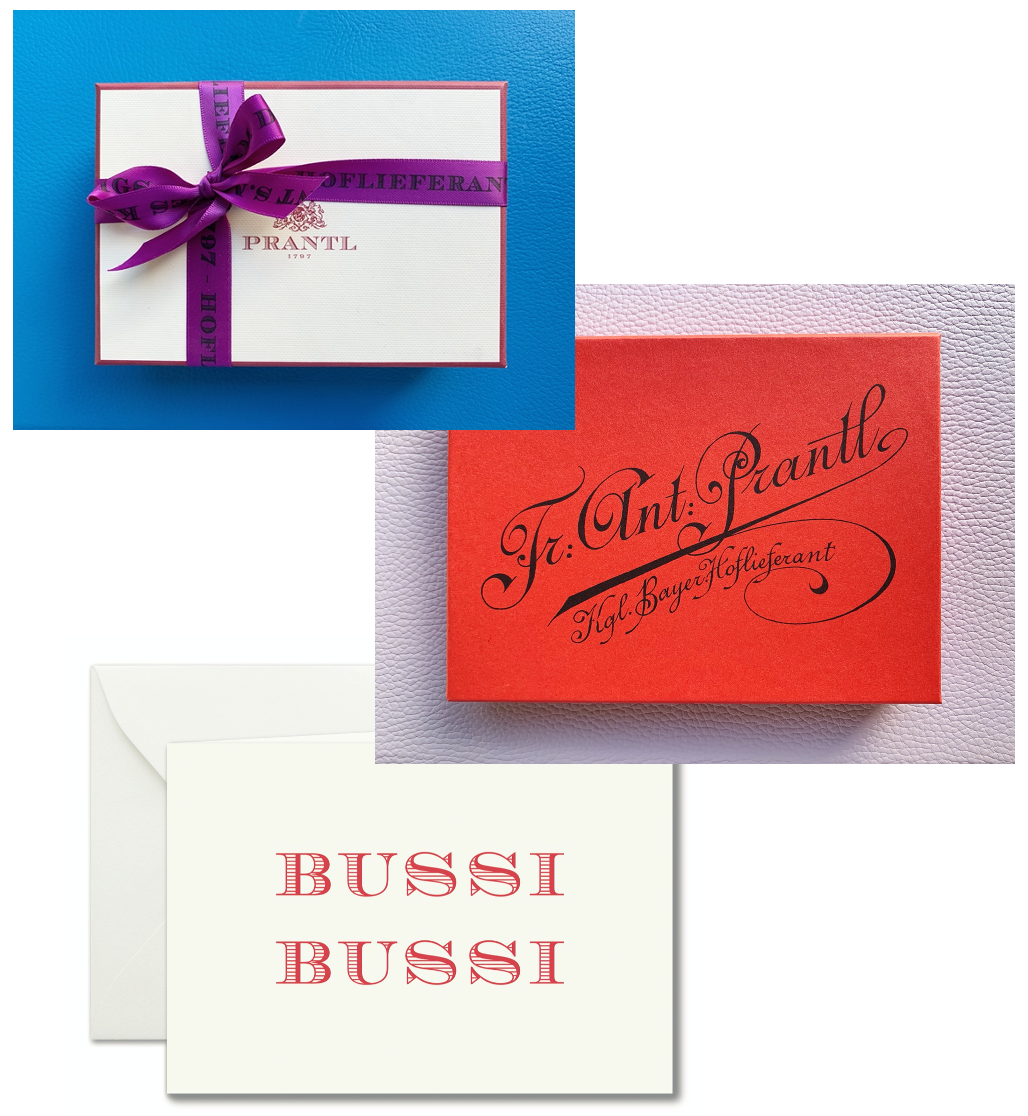 Just across the street towards Wittelsbacherplatz is Ed Meier – the purveyor of choice of the Sloaney Ponies of Munich. (The population is rather large and always well-groomed.) Traditionally Munich’s most fashionable bespoke shoemaker, Ed Meier has become the darling of Bavarian country chic for men and women alike. Get a pair of deer-skin gloves as a souvenir – it will become a cherished memory. 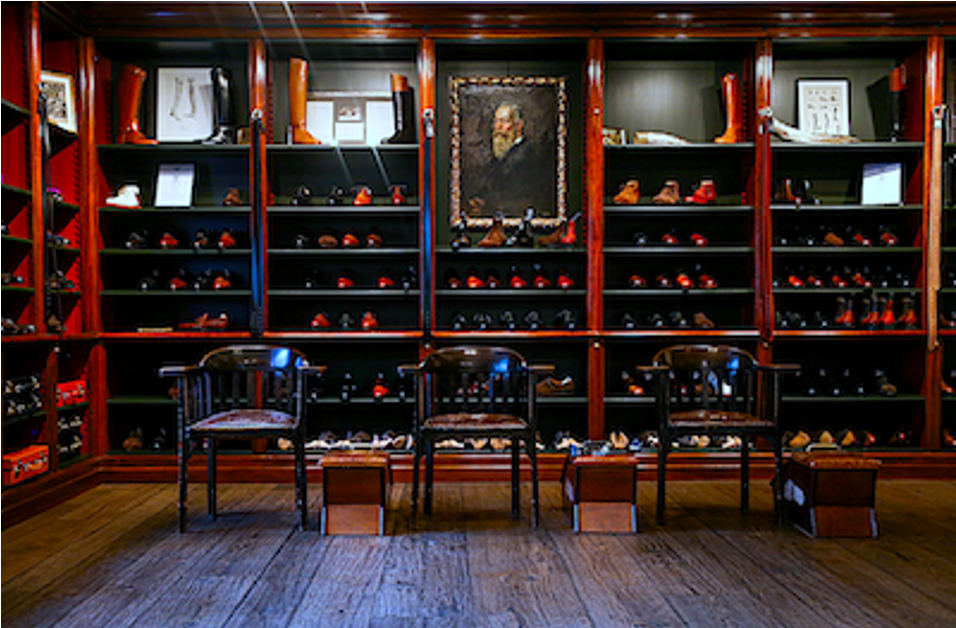 No one will eye you up and down if you succumb to the temptation and change into some fancy traditional clothes. Anything short of dashing, in fact, won’t even be noticed, and only the outrageously fashionable will feel an approving glance when Munich gathers for the défilé at the city’s late afternoon hotspots. Take your new outfit to the right setting by proceeding to Tambosi at Odeonsplatz, and either sit out front to enjoy the view onto the baroque splendour of Theatinerkirche or walk right through into Hofgarten to sit below arcades and foliage. 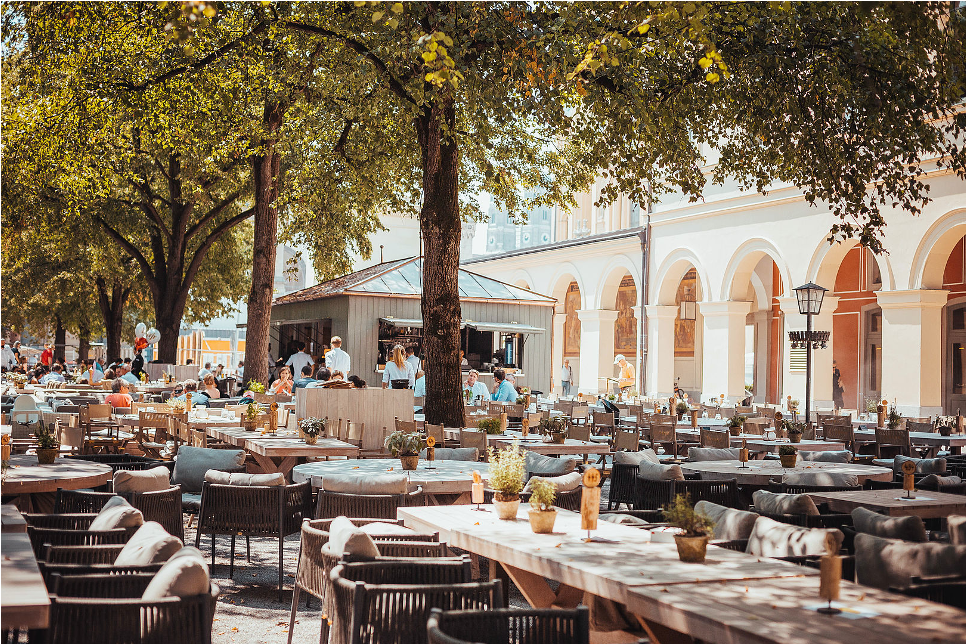 If you want to keep the mood and enjoy an evening finding out what those mythical Bavarian dishes look and taste like if properly done, make sure to book a table at Spatenhaus an der Oper opposite the city’s notoriously sold-out opera, and ask to be seated upstairs to have a view onto the Neoclassical scene in the heart of Munich.

If glam is what you’re looking for, start with an apéro at the world-famous #schumannsbar before proceeding to Munich’s fashion and film favourite #brennerrestaurant. 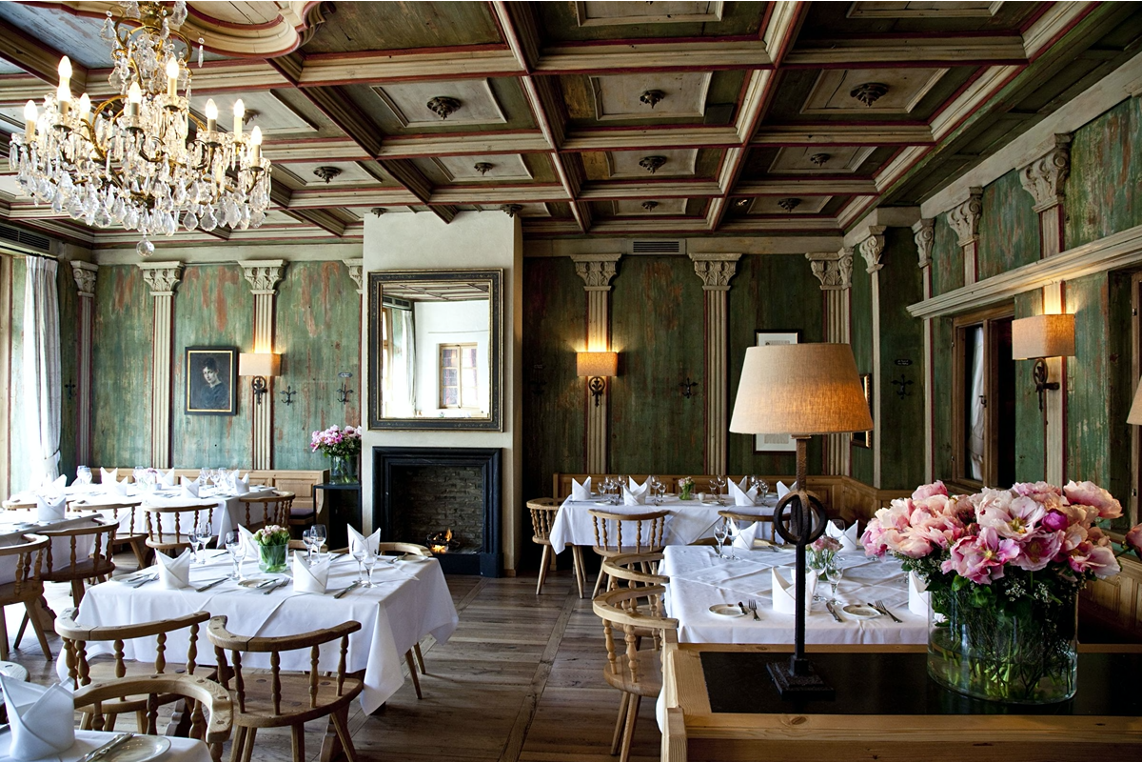 There are many truly nice hotels to stay when in Munich. Bayerischer Hof would be a classic. Hotel Vier Jahreszeiten (Four Seasons) right on Maximilansstraße, Munich’s traditional boulevard for the Lamborghini dog walk. A mid-century-modern praline is Hotel Louis right on Viktualienmarket. But our recommendation for the picture-perfect 48 hours in the city some know the Athens on the Isar is another.

At first sight, you might think the Munich Mandarin Oriental is a little tugged away in the smaller streets of the city’s historic center. But make no mistake, beloved by Munich regulars for not only for its impeccable service but its roof top pool with 360 degree views over the most treasured sites of the Bavarian metropolis. For breakfast with a view, there is no better place in town. Staying here makes the city center your playground – and the famous English Garden one of many options for a picturesque morning run. And for everyone who still misses the scene of a beer tent at Oktoberfest, Munich’s Hofbräuhaus (the institutionalized form of Wiesn) is literally next door! 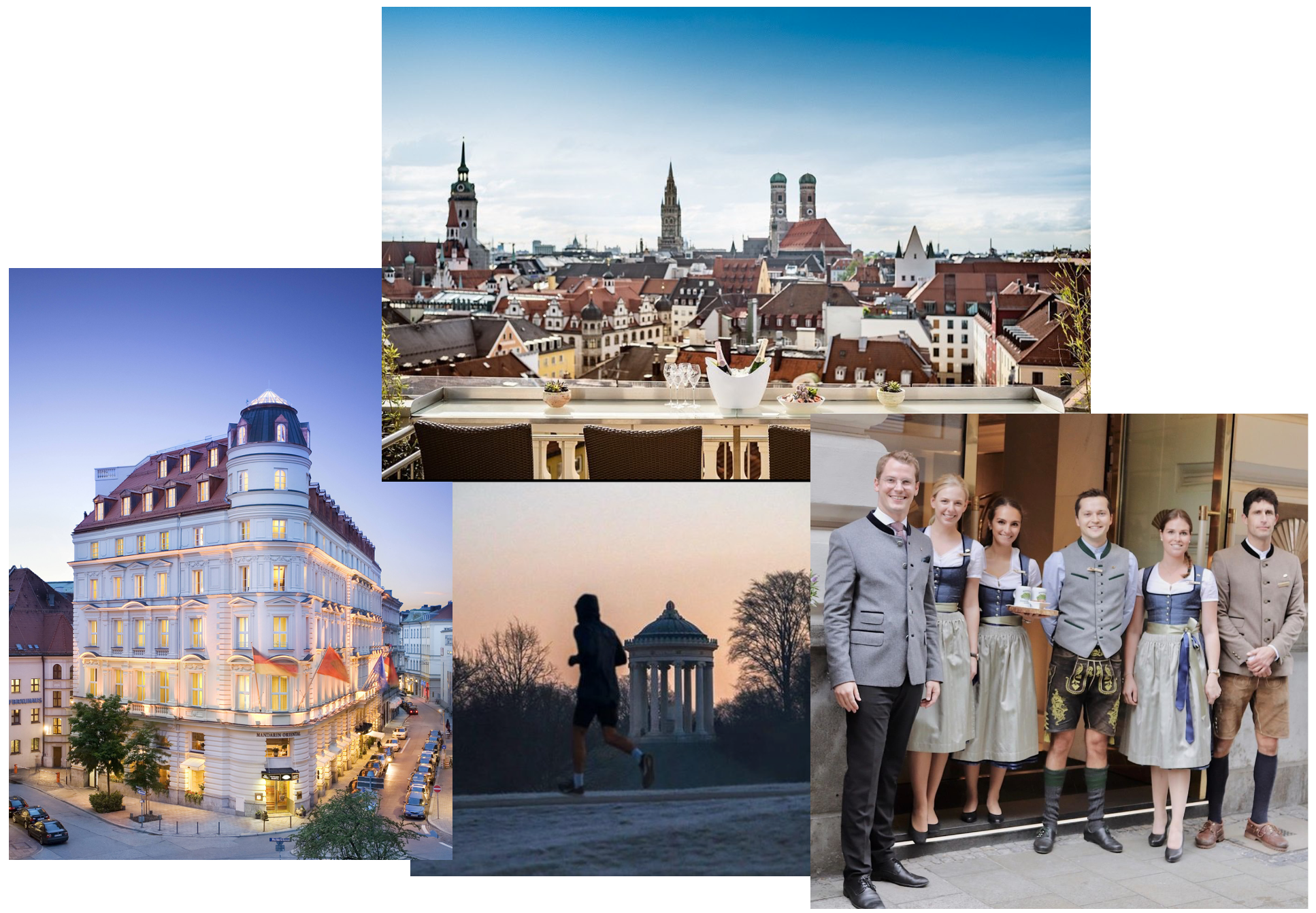 A Bavarian herself, Ellen von Unwerth, the German model who became one of the world’s most sought-after fashion photographers and is best known for her playful female portraits, knows to pull all the stops when it comes to stereotypes about Dirndl and Lederhosen. For Heimat (Homeland), TASCHEN’s glamorous collector’s-edition tome, a collaboration with mountain-lover Mark Schulz, who crafted the words accompanying von Unwerth’s pictures, she has done so in the most delicious way. Four art editions (No. 1-400) are available with a signed photographic print. O’zopft is!