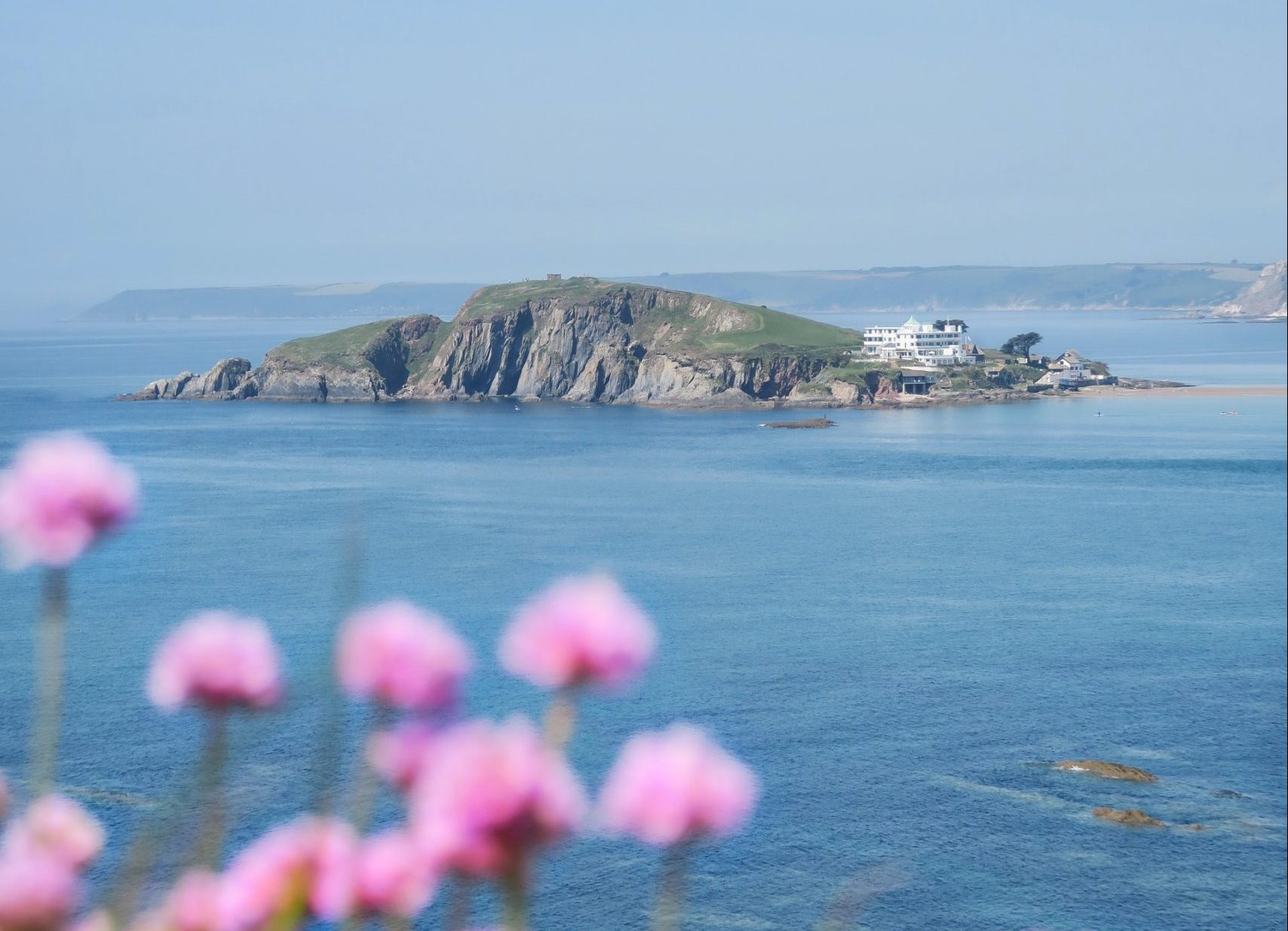 “Very few of us are what we seem.”

And then there were None:
With Agatha Christie on Burgh Island

“Very few of us are what we seem.”

There is a reason modern day crime pales against a plot from the mind of Agatha Christie. It is called suspense. A sensation that is exceedingly rare to come by in the age of streamable, thirty-five-minutes-per-episode Fast Crime; conceived by a pool of screen-writers who produce dialogue in work units of lead- and sub-stories and think a whole is always, always made up of three parts (already St. Augustine knew it’s more complicated than that). The profound thrill dished up by one of Christie’s old school murders, in contrast, compares like a five course meal – frothed, fried, frozen, filleted and flambéed – to avocado toast.

The art of setting a table for dinner is not unlike setting out the stages of a good murder mystery. Planning starts, of course, long before with a list of guests. As in life, there needs to be the right balance between harmony and friction (just imagine how terribly boring it would be to spend an evening without a little drama – good grief). States of literacy and cultural temperaments have to be taken into the equation. Backbenchers over a certain age might drown out any voice other than their own, while for guests on a strict no-carb diet a flower-bouquet featuring a few fresh Yerba-Mate leaves should be placed in close proximity. Shrill sopranos need a really big room to go at least partially unheard. Should European guests attend, tested etiquette is to compliment on the elegance of France’s first lady, the political leadership of Angela Merkel, the beauty of Italy’s ancient ruins, and, of course: don’t mention the war!

Equally, like a good murder mystery, dinner itself should at least be a five course affair. Plus coffee and Port; and for these best to move to another room. After soup, fish, – ideally followed by a little sorbet – main, and desert, tensions usually are sufficiently high to allow for a remix on more plush seating. Christie’s And then there were None became the novel that became not only her biggest hit but with round about one hundred million copies sold still is the most successful crime story of all times.  Unforgotten the scene where the guests of Mr. & Mrs. Owen change into the sitting room where a gramophone record is played accusing all eight of MURDER. 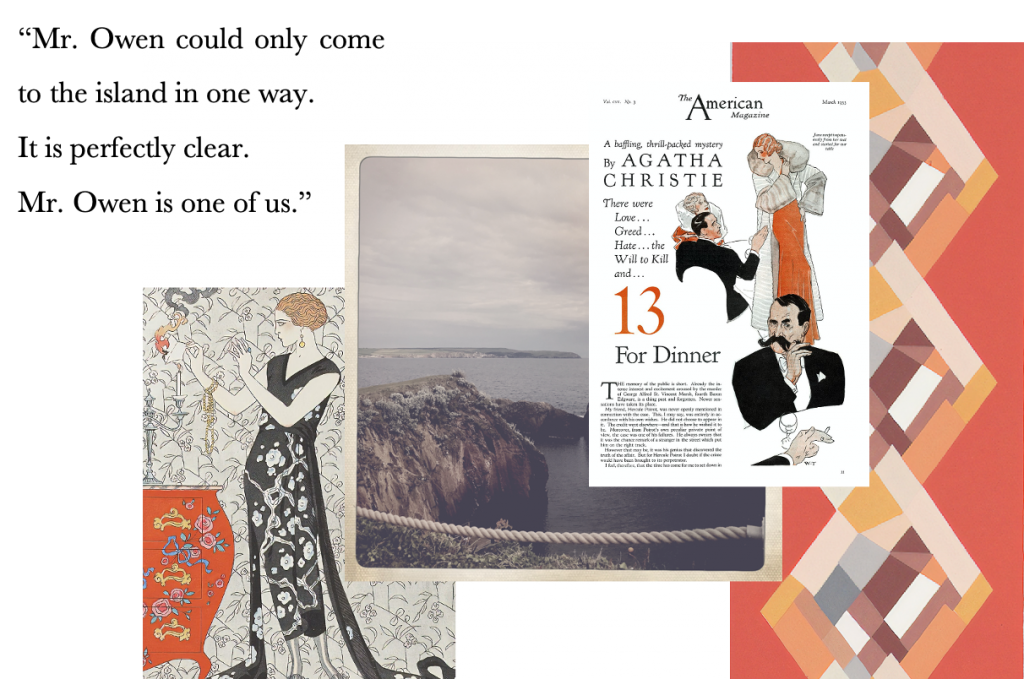 Form there things take their course – as they usually do once the stickies come out. Here the concoction of Christie’s well planned story begins to play out all its cleverly chosen ingredients. First: A reduced scene. The eight guests have been asked to dinner on a small island, just off the Devon coast. A boat has brought them over, then taking off again and leaving the group trapped. The guests are looked after by the somewhat sinister butler and his mousy wife, but for some unknown reasons the hosts themselves still haven’t arrived.

Yet again, as with any well chosen dinner party, the second golden rule for a good plot comes to pass: Depth of characters. While for the rest of the novel we really witness nothing else than the plain subsequent killing of one guest after another, the increasingly outrageous setting – with the exception of the occasional set of nerves flaring up – always remains perfectly civilised and highly entertaining.

If you think this little remarkable, you might have forgotten what is the more common scenario these days. After all, television companies around the globe have come up with a whole number of derivative formats of Christie’s plot, in which a group of ten people – cast either under the guideline of the aesthetic framework established by the toy manufacturer Mattel– is given the task to successively get rid of each other either on an island / jungle / farm / America’s the next top model villa / Downing Street No 10 (no hold on, in case of the last one viewers cannot vote participants out over the phone – but you recognize the pattern). 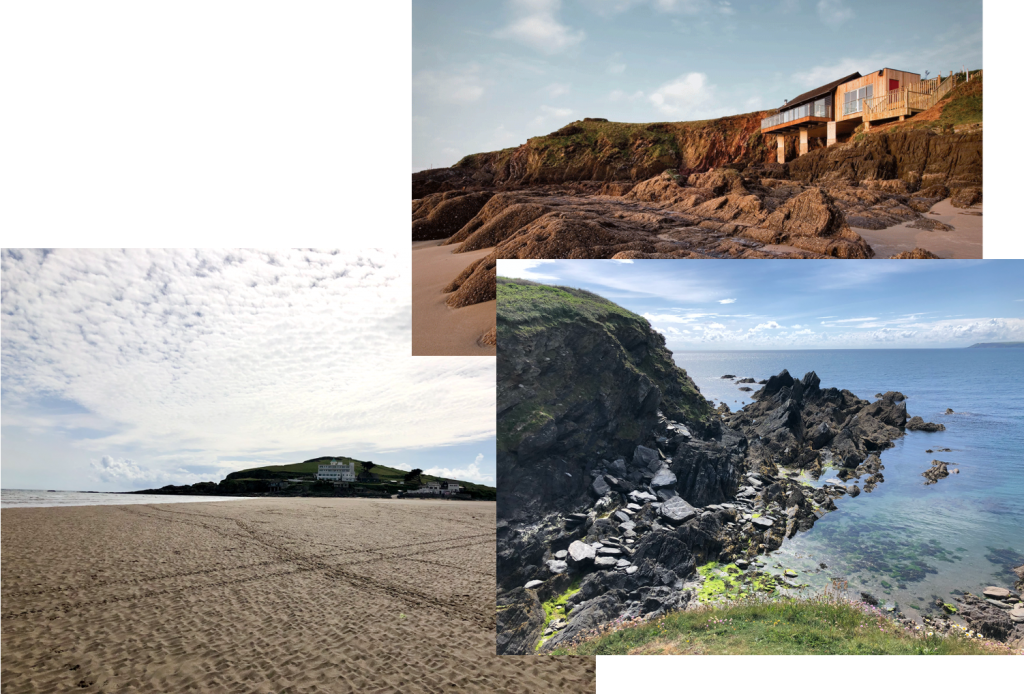 That Christie came up with the plot of And then there were None on Burgh Island makes perfect sense. After all, the island’s reputation for glamorous dinner parties had a long history already back then. In the 1890s, the music hall star George H. Chrigwin built a small wooden house on the otherwise empty rock with the sole purpose of having a place where he could house exuberant parties on the weekend. In 1927 the island was bought by the film-producer Archibald Nettlefold, owner of Nettlefold Studios, who replaced the wooden party house with a chic, ultra-modern hotel in what history has since termed art deco style. Having survived the darkness of the second World War unscathed, it has recently been carefully restored and now shines more glamorously than ever.

In the 1930s, Agatha Christie, for reasons that won’t need explanation once you’ve seen the place for yourself, made Burgh Island Hotel, located on the eponymous island just off the Devon shoreline, her second home. In the beach house that was built for her exclusive use, she wrote, apart from And then there were None, the 1941 Evil under the Sun. Christie’s spacious yet secluded and light-flooded abode hovers evocatively over the water and still makes a brilliant writer’s retreat today. Just set yourself up at the desk facing the sea and inspiration will come in waves.

For anyone who prefers the life of the critic, and rather spends their time on the island reading one of Christie’s books, comfortable deckchairs on the lawn outside the hotel further up the cliff, await with breezy views over to the Devon coastline. The day could not be spent in greater idyll; interrupted only by a quick dip off the wooden pier down on the private beach – and for fresh scones and clotted cream in the afternoon.

Provided you have not packed too light, and brought along your tux and an evening gown, you should change into your dancing shoes for the night. After dinner in the hotel’s period-style Grand Ball Room (which is charmingly not too grand, and equipped with Bauhaus Freischwinger chairs that will stylishly swing you into the right mood)  – it is time to dance the night away to live music from the house band. Whoopee! 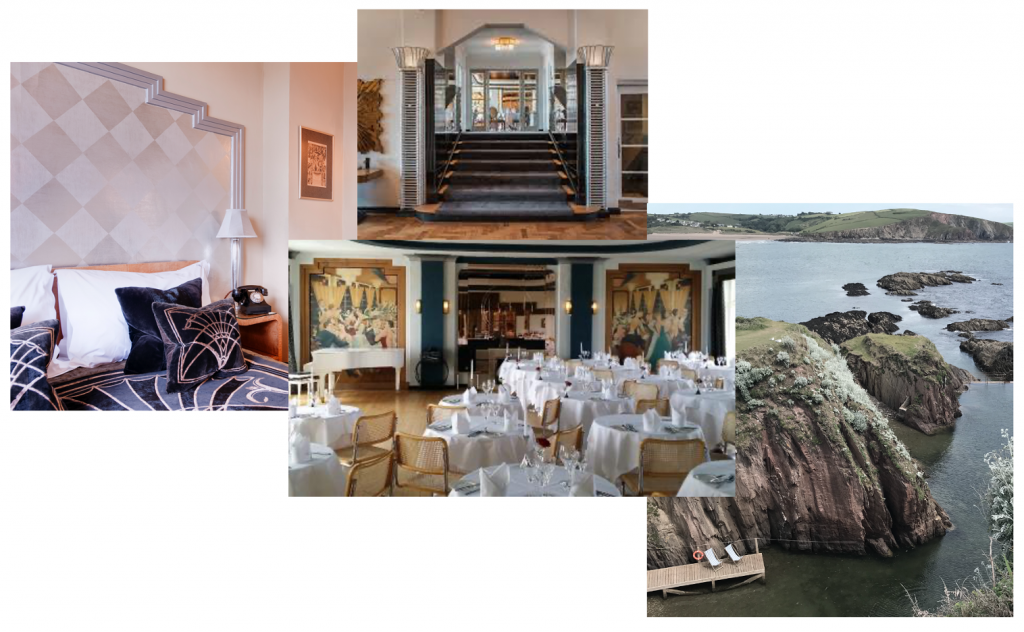 If you have exhausted yourself too much by a long walk on the tideland that the retreating sea reveals in regular rhythm, and want to opt out from black tie dinner, the hotel’s fish restaurant is your catch of the day. When you call it a night, 25 individually decorated rooms and suites will welcome you into an reenactment of the golden twenties – updated for comfort and functionality – but strictly in style.

← England, Eden, Entrecôte: The Long Chair Guide to Bucolic Bliss Wild Flowers in the Garden: With Stella Gibbons in Sussex →